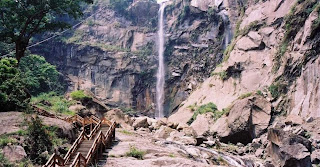 
Penglai Pubu (waterfall) is situated about 2KM down Road 149 from the village of Tsaoling (Caoling). Tsaoling is at an altitude of about 800m in West-Central Taiwan. The area offers a good mix of low and mid altitude forest birds, but is not really well known as a birding destination. The area got shaken up quite badly in the big 921 Earthquake in September 1999.There is still a lot of damage in the area, which the local authorities have made into a type of "memorial" come geological display, complete with information boards.

Penglai Pubu is a waterfall that was quite a popular picnic destination before the earthquake. It had a cable way and was very touristy. The earthquake put an end to the cable way, and bustling tourist trade. Now it's a great place to have a walk through some good forest, before coming to the waterfall.

Penglai is a very reliable area to see the endemic Taiwan Whistling Thrush Myophonus insularis. This smallish shimmering deep blue beauty jumps from rock to rock at the base of the waterfall. The rocks below the waterfall are also frequented by the endemic subspecies of Plumbeous Water Redstart Rhyacornis fuliginosus affinis, and White and Grey Wagtails.

Penglai also hosts small numbers of the endemic Taiwan Sibia Heterophasia auricularis and Taiwan Yuhina Yuhina brunneiceps in summer and numbers increase quite a bit in winter. Their distinct call makes them quite easy to find. Don't despair if you don't see them at Penglai because the forests edges around Tsaoling Village are full of them. The area also hosts a number of endemic Swinhoe's Pheasant Lophura swinhoii, but these are never easy to find. Shihpi, a few miles away is also a reasonable Swinhoe’s Pheasant site and Sibia and Yuhina are common.

To get to the Tsaoling area, take the Douliou exit from the No.3 Highway. Once in Douliou, exit the town on the No.149 road and follow the Tsaoling signs. It takes about an hour from Douliou to Tsaoling. A bus runs from the area outside Douliou train station to Tsaoling. There are a number of hotels in and around Tsaoling. Remember that this is rural Taiwan and not much English is spoken in these parts.


Back to Birding Locations.


Posted by Wild at Heart Legal Defense Association at 18:34