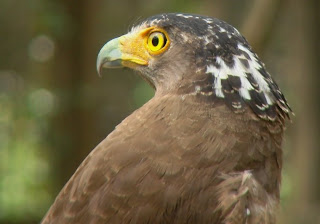 
I arrived at the bridge leading into Huben village at about 2:30 and was greeted by the calling of the young Crested Serpent Eagle I had seen on Monday. I have seen a young eagle in this area quite a few times over the past two months so it looks as if it's established a territory in this area. I pulled over and watched it circling overhead for a few minutes before carrying on.

Just before arriving at the temple I spotted another Crested Serpent Eagle sitting in a dead tree across the valley. I stopped and watched it for a few minutes. It was a majestic looking mature Eagle. Its crest fluttered in the breeze like plumes on a knight's helmet. I snapped a few long distance shots and moved on.

I parked my motorcycle under the big Bayan tree at the temple and headed off down the track. The usual Light-vented Bulbuls, Spotted Doves, Eurasian Tree Sparrows, Pacific Swallows, and Striated Swallows had all quickly put in an appearance when the calls of a Bronzed Drongo stopped me. As I watched the Bronzed Drongos the calls of some Dusky Fulvettas and Taiwan Scimitar Babblers alerted me to their presence. It wasn't long before some Rufous-capped Babblers were putting on a show just off to my right. Shortly they were joined by the Dusky Fulvettas and Taiwan Scimitar Babblers.

I moved on and was treated to a view of a dazzling Black-naped Blue Monarch. Some Grey-cheeked Fulvetta started calling just out of view. The sharp almost hiss like alarm call showed that they were well aware of my presence. I spotted a single Japanese White-eye fly overhead and land in the top of some bamboo I was standing near. Moments later a flock of about fifteen joined it.

I arrived at a field planted with orange trees. Light-vented Bulbuls and Collared Finchbills were darting between the trees. There were a great number of these birds amongst the trees. Moments later I spotted a pair of Black Bulbul with there blood red bills and legs offset against there jet black plumage. Then something else caught my eye. It disappeared off amongst the trees. I never got a second look but it was a thrush of shorts for sure, probably a Pale Thrush or Dusky Thrush. Moments later I heard the distinct chi-up notes of the call of a Plain Prinia. I searched the scrub near the path and it wasn't long before I had located it. I looked up and the sky was filled with House Swifts.

I moved on and spotted my third Crested Serpent Eagle for the afternoon flying out of a tree across the valley. I then noticed a flock of about fifteen doves in a dead tree across the valley near to where I had seen the eagle. Something about the doves looked odd. They didn't appear to be the usual Spotted Doves or Red Collared Doves that are very common in Huben. I glassed them and to my joy they were Oriental Turtle Doves. This was a first for my Huben list. Oriental Turtle Doves are quite common in the North of Taiwan but down in the central areas they are uncommon to even pretty rare in some places.

It was getting on and I needed to get back. I had a good walk back to the temple and the second eagle was still sitting in the dead tree across the valley. I started off on my motorcycle and just as I was leaving Huben I had fine views of the brilliant green of a Taiwan Barbet. In Mandarin it is called wu-se niao or bird of five colours. A great way to end the day.

Posted by Wild at Heart Legal Defense Association at 16:27