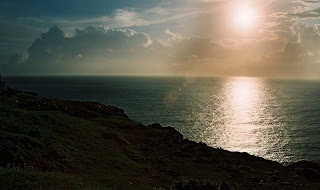 
The Penghu Archipelago or the Pescadores is made up of 64 islands and is located in the Taiwan Strait about halfway between Taiwan and the Fujian coast of southern China. This beautiful archipelago is an important stop on the Southeast Asia Migration Routes. Penghu is a county of Taiwan and a favourite summer getaway spot for many Taiwanese.

A summer visit to Penghu offered me the opportunity to do some homework before doing a trip during the autumn migration period. Summer is also the best time to view Black-naped Tern and Roseate Tern. Both of these birds had eluded me on Taiwan and I really wanted to see them.

Armed with very little information I landed at Magong Airport on the main island of Penghu. While Taiwan is tropical and mountainous, Penghu has almost a Mediterranean look about it. Penghu has a long history of foreign occupation and the Dutch, Spanish, French and Japanese have controlled these islands in the past.

The first two days were rather frustrating and I was getting nowhere with my birding enquiries. On the third day I hired a scooter and planned a trip of the islands of Penghu, Paisha and Hsiyu which are linked by bridges. I left the small town of Magong and headed for Paisha. About 4km out of town I came across a visitors centre. On making enquiries I was directed to the Tsai Yuan Jiu Yuan wetland area about half a kilometer away. I was also given a contact number for a local birder. It looked like things were beginning to happen.

After spending some time walking around the area I moved on. I crossed the bridge to Paisha Island and had lunch. I saw a post office and needing some stamps I went in to buy some. Taiwan brought out a postage stamp and book series on the Chinese Crested Tern and Blue-tailed Bee-eater a few years ago. These were snapped up very quickly by birders and stamp collectors and are rather hard to come by now. While buying the stamps I saw that they had a copy of each book on sale. I asked the "sales clerk" if I could get copies of the books. He replied that I could buy the two on display only as these were all they had.

I answered that I would take them. After I had payed for them and was about to leave the "sales clerk" asked me if I was a birder? I replied that I was and he said that he was a very keen birder. We got chatting and I couldn't believe my good fortune. The "sales clerk" turned out to be the Postmaster of Paisha Island and one of the co-authors of the field guide "Birding in Penghu". We exchanged telephone numbers and made plans to have dinner the following night in Magong.

I carried on through Paisha and came to the very long and famous Kuahai Bridge that links the island of Paisha to Hsiyu. I took the obligatory photograph and began crossing the expanse. I hadn't gone far when I noticed a number of terns. I stopped and glassed them. They were what I had come to Penghu for, they were Black-naped Terns. The remains of the uprights of the old bridge built during the Japanese occupation lay about 30 metres from the new bridge and on each of these uprights were many nesting terns.

I had my dinner with Wang Tian-tai and he gave me a copy of his book. The next morning he took me out in a glass bottomed boat to see the Roseate Terns I was wanting to see. I got to see the terns and had some great views of the beautiful coral reefs and marine life around Penghu before having a great seafood lunch and my trip back to Taiwan.

Back to Trip Reports.


Posted by Wild at Heart Legal Defense Association at 13:41