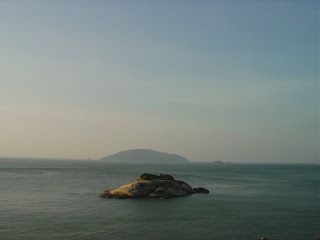 For countless generations spanning countless millennia these graceful sea phantoms had returned to these rocks each summer to breed. The phantom was never common and it had had a bad run. Man constantly raided its breeding grounds robbing its nests of eggs and the new generation. Summer typhoons sometimes laid waste its breeding grounds, too. The phantoms had withstood the typhoons but the newer pressure of egg collecting and man expanding his range was steadily taking its toll.

Men of science only found this species in 1863. A naturalist named Schlegel had described it and named it Sterna bernsteni or the Chinese Crested Tern.

On the rocky outcrop the killing began. The graceful white, grey and black phantoms with its bright orange black-tipped bill fell from the sky as they tried to protect their nests. When the guns fell silent the lifeless bodies of twenty-one phantoms were collected from the amongst the bloody mess of butchered seabirds. The men returned triumphant for they now had the skins for specimens to grace the museums of Europe.

Humankind looked for the Sea Phantoms but they were gone. As time passed we came to realise that the massacre on Shandong was probably the last of its kind. Then, a flicker of hope. A claimed sighting. Three birds observed on the sand flats at Beidaihe on 10 June 1978. Humankind looked but nothing. Then, again, another claimed sighting. A small group reported from Ko Libong Wildlife Sanctuary in Thailand in July 1980. Humankind looked and again found nothing. Finally, after a decade more, there was another claimed sighting of three in Northern China in September 1991. Again, nothing was found. It would seem that indeed the Sea Phantom had gone.

The Taiwan controlled archipelago of Matsu just off the Fujian coast had for years been the front line in the ROC-PRC standoff. Finally, in the late 90s the islands were opened up and tourism was permitted. The military standoff had in some ways created a measure of protection for birds. There were times that military exercises had taken a heavy toll but at other times it afforded protection to some seabirds. In June 2000, while editing footage for a film on the terns of the Matsu Archipelago, producer Liang Chieh-Teh, and Chang Shou-Hua, Chairman of the Wild Bird Society of Matsu, noticed some smaller terns amongst the Greater Crested Terns that they had filmed. They were puzzled. They spent hours trying to work out what these birds were. Were they the juveniles of the Greater Crested Terns or perhaps one of the other tern species that frequented the area ? Finally, an old picture of something from long ago. No, it couldn't be but yes it was. On Matsu the phantom had survived. There were less than ten but they were Chinese Crested Terns. 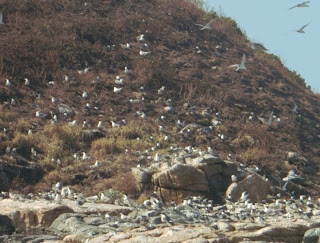 Terns of a number of species on a rocky outcrop in the Matsu Archipelago. For over 60 years the Chinese Crested Terns hid amongst them.

The global population of these birds is less than fifty. Since their rediscovery in 2000 we have seen nests robbed by Chinese fishermen. There have also been reports of dynamite fishing around the colony. The Phantom is just holding on and its future remains uncertain. In July 2006 I was asked to join a special expedition to view the birds from a boat. From the tossing deck of a coastguard vessel on choppy seas with trembling hands I lifted my binoculars and met the Sea Phantom.

A poor shot from a tossing deck of a coastguard vessel. A Sea Phantom. 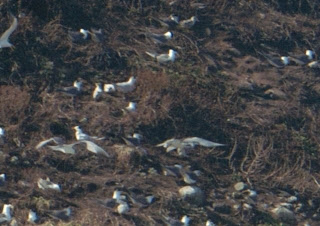 
Posted by Wild at Heart Legal Defense Association at 17:54