The little island of Kinmen (Quemoy) lies about 2km off the coast of China's Fujian Province, near the city of Xiamen. It was on this little island that the last battles of the Chinese Civil War played themselves out. The island was occupied by Chiang Kai Shek's Nationalist Forces in their retreat from the Mainland in 1949.The island still remains under the control of the Republic of China on Taiwan though historically Kinmen is a prefecture of Fujian Province. The military is still very much dug in on Kinmen. The soldiers of the R.O.C. and the P.R.C. still stare at each other across the narrow strait of water that separates them. There are P.R.C. controlled islands just several hundred metres from Kinmen.

The PRC started shelling Kinmen in August 1958 which gave rise to the 20 year long Artillery War which ceased in 1978.The Island has been able to recover from much of the effects of the shellings. Now much of the island is covered by forest which gives way to fields of sorghum and quaint villages.

Marshall Law was lifted in 1993 and in 1995 much of Kinmen was proclaimed a national park. The island in recent years has been open to tourism and has become famous as a great birding destination. Indeed a trip to Kinmen is very much 'Birds and Battlefields'.

Kinmen is at its best during the spring and autumn migration periods and in the winter. In summer though, things quieten down to just the usual residents, with one marvelous exception, the Blue-tailled Bee-eater Merops philippinus arrives and breeds on Kinmen. It was to see this bird that I made a trip to Kinmen.

I arrived at Kinmen Airport at about 16:30 on Friday, 15 August. A minivan from the hotel was at the airport to meet me. I got to the hotel and checked in. By about 17:15 I was ready to go exploring around the hotel with my bins.

My walk produced a lifer for me in the form of a Collared Crow. I also saw Light-vented Bulbul, Magpie, Crested Myna, Tree Sparrow, Oriental Magpie Robin, Spotted Dove, Grey Treepie, Large-billed Crow, Barn Swallow, Long-tailed Shrike and Japanese White-eye. I also came across a bird that I could not positively ID at the time. I thought it was possibly a Masked Laughingthrush, fortunately, I was able to solve the riddle the following day.

I awoke the following morning and went out onto the balcony. There in a tree nearby was another lifer for me, a Hoopoe. Hoopoes are only recorded as a vagrant on Taiwan and I had never been lucky enough to see one. I have seen their African cousin many times before and was very keen to try and see one of the Eurasian variety. I knew they were resident on Kinmen but was unsure as to just how common they were. I was soon to discover that they are very common on Kinmen and must have seen more than forty on the trip. The sight of Hoopoe nesting on the quaint tiled roofs of the traditional stone houses is something I'll never forget.

After breakfast we headed off to the Guningtou Battlefield. The battlefield is very interesting and great for birding. Apart from the battlefield museum there is a wildlife centre in the area with a small but lively wetland. The wetland produced a White-throated Kingfisher and a Chinese Little Bittern for us.

The staff at the wildlife centre was very helpful and marked all the birding sites that they thought we should visit. They also told us the best places to view the Bee-eaters. I also was able to buy a copy of the Kinmen birding guide at the centre. As I glanced through the book I recognised a picture of the unidentified bird from the previous afternoon. It was a dark morph Long-tailed Shrike Lanius schach. I have often seen Long-tailed Shrike on Taiwan but was not even aware of there being a dark morph form (Both forms of the Shrike can be seen on Kinmen). Our walk around the battlefield produced Common Pheasant and Greater Coucal.

During the heat of the day we occupied ourselves with exploring bunkers, quaint villages and temples. As it became cooler and evening approached we went off to find the Bee-eaters. They were exactly were they were supposed to be. We had wonderful views of them hawking insects from trees and power lines. As the sun set they settled down for the night in great columns along the power lines.

The next day we headed off to Mashan to stare across the narrow strait of water between Kinmen and the mainland. The Mashan Observation Station is still under military control. Visitors have to surrender their passports on entering. The Observation Station is at the end of a huge bunker complex. It gives one an idea of how complex the subterranean defenses of the island are. The centre also houses the propaganda station. Here, until quite recently, the world's largest (?) speakers would broadcast propaganda to the mainland.

From Mashan we headed off to the August 23 Artillery War Museum. The east side of the island is the best place for Bee-eater. Here Bee-eater is visible along the roadside in great numbers as they hawk insects from power lines. The Artillery War Museum is well worth a visit. It gives one a real idea of what life was like on Kinmen during the 1958-1978 Artillery War.

In the first 44 days of the war the P.R.C. rained down 477 000 shells on the tiny island. Shelling was eventually regulated and the P.R.C. and the R.O.C. Forces being allowed to shell each other on alternate days, Sundays being a day of rest. On Sundays R.O.C. troops had to gather shell fragments that were used to make meat cleavers. The meat cleaver business on Kinmen is still doing well today. There is a Park and a lake (Lake Tai) at the Museum. The area produced Blackbird, Koel, Chinese Pond Heron, Cattle Egret, Yellow-bellied Prinia, White-breasted Water Hen, Moorhen, Little Grebe, Black-crowned Night Heron, Little Egret, Spot-billed Duck, and other common birds.

We were due to leave the island the following morning but Typhoon Haitang hit Taiwan grounding all air traffic and we were stranded on Kinmen for three extra day’s holiday. The weather was great, so it was a real bonus. 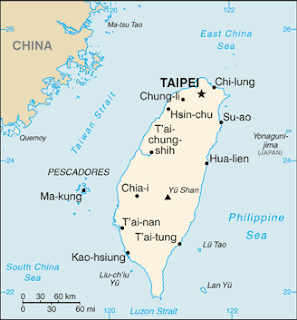 Area map. See Quemoy Island(Kinmen) on the Chinese Coast (above 24 on left margin).


Back to Trip Reports.


Posted by Wild at Heart Legal Defense Association at 13:40

Eight years down the line, but— thank you! Very useful. I'm headed for Kinmen later this year (2016)

Nice Blog, Such a informative information in this blog and I also read your blog. you write such a good blog. I also inspire from your blog. If are you looking Kinmen Airport Code visit our site for more details.