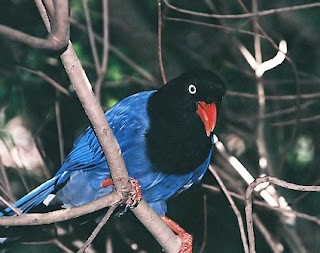 Description:
A large azure-blue Magpie endemic to Taiwan. The head and upper breast are black. The tail is very long. The tail feathers are tipped with black and white and the central two white tipped feathers are longer than the rest of the tail. The bill and feet are bright red and the iris is yellow.

Status and distribution:
It inhabits low altitude forests between 100-1200 m and usually at low altitudes in winter. It is generally uncommon, but there are areas where it is locally common. It is absent from the cleared western lowlands.

Habits:
Social and often flies in a troop one behind the other in a “nose-to-tail train.” Feeds on fruit, small reptiles, insects, eggs, birds, and small mammals.
A social breeder nesting in tall trees, and breeding from April-August.


Posted by Wild at Heart Legal Defense Association at 22:33