Before dawn I was in Huben. It was still very dark and there was a chill in the air as I turned into the yard of Mr. Chang's traditional Taiwanese house. Multitudes of dogs snarled and yapped. They didn't seem too happy to see me. A large roster came over. He seemed friendlier. It was almost as if he was coming over for a predawn chat before doing his morning duty and waking the neighbourhood. Mr. Chang came out and we headed off up the track following the river. We both bounced around on our motorcycles as we headed for his little wooden cabin further up the valley. Today we had a purpose. We were after the very elusive Silver Ghost of Taiwan's forests.

We reached the cabin and parked the motorcycles. We loaded up and climbed down onto the rocks in the river. To go deep into the Huben forest one has to follow the course of a river or stream. The steep cliffs and thick vegetation make it impossible to get deep into the remote parts of the forest other than by this means.

Streams in Huben are very rocky. Generally, they don't carry very much water but when it rains they become raging torrents. It was still dark as we started on our way. We hadn't gone far when the predawn calling of an endemic Taiwan Partridge started. Mr. Chang responded and the partridge called back. It wasn't too far off but the thick forest shielded it from view. We carried on and dawn began to break. The calls of songbirds surrounded us but it was too dark to see anything.

High in the trees above us a Crested Serpent Eagle greeted the new day with a call. Mr. Chang smiled and called back. The eagle immediately responded. We carried on with the soft calls of the eagle floating to us on the breeze every so often.

It was hard going. Despite the chill in the air I was beginning to build up quite a sweat. Mr. Chang indicated we were getting close. Even the slightest rustle of clothing is enough to startle the Ghost. We moved very quietly. We carefully stepped from rock to rock. The forest was light enough to see a fair distance ahead now. We moved forward slowly. We would stop to listen and scan the area ahead for movement. Mr. Chang's sharp ears caught something. I hadn't heard it but he said he had. The Ghost was near.

We moved on. The river narrowed and vegetation had taken root in the stream bed. We stopped and searched the shadows ahead. One second I was looking at a shadow and the next instant the Ghost stepped forward from out of the shadow. We had seen the Ghost at the same instant. We just smiled and nodded. There it was, the distinct silver-white back, crest and tail contrasted with a dazzling blue of the body and the fire-red head and legs. I started to shake with excitement. I could hear my heart drumming in my ears. The Ghost melted into the vegetation and disappeared. I stood there breathless. There really wasn't enough light for a shot but I took my camera out of its bag and moved forward.

I crept over boulders and moved towards where the Ghost had vanished. I crept forward and once again it stepped out of the shadows. It was very dark but I took a few shots just to capture the moment. In an almost dream-like state I watched the Silver Ghost moving about in front of me. 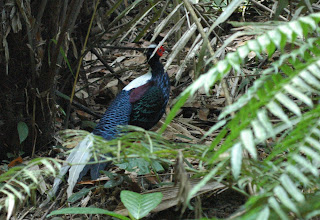 Robert Swinhoe had discovered the species, which is endemic to Taiwan, in April of 1862. Gould had described the species in the 1863 edition of The Ibis. Even the stuffy Victorian, Gould, was impressed by Formosa's Silver Ghost and stated, "This exceedingly beautiful species is one of the most remarkable novelties I have had the good fortune to describe." Gould had described many species from around the world. He named the species after Swinhoe, Lophura swinhoii. When this majestic species was first revealed to the West, many dubbed the newly described Swinhoe's Pheasant as the world's most beautiful bird. To some, it still is.

The pheasant moved off slowly. It was unaware of my presence and I was able to watch it for about two minutes in all. All too quickly time passed and it melted back into the forest. Mr. Chang and I pressed on. I was euphoric. This was my first Huben male. The Swinhoe's Pheasant is considered a bird of the mid elevation mountain forests. The handful that inhabit the lowland hills of Huben indicate that the species probably did inhabit the lowlands before man turned much of the lush lowland forest into fields and paddies.

We moved on and then retraced our steps hoping to get another view of the pheasant. No luck, so we pressed on again. Just as we came to a steep rise Mr. Chang’s sharp ears had heard something. We stopped and waited. Moments later I heard it too. There were Ghosts in the undergrowth. We waited. Suddenly Mr. Chang pointed. I didn't see anything and then my eyes caught a movement. There was a pair. I watched them moving through the undergrowth and then they vanished. It was time to go back.

We walked back down the stream. Monarchs, Fulvettas, and Bulbuls moved about through the trees. Some Spot-breasted Scimitar Babblers started to call. The Crested Serpent Eagle was calling, too. I was soaking the tranquility up and savoring it.

At Mr. Chang's cabin we made some Oolong tea and relaxed. We talked about Huben and its birds. I mentioned the Malayan Night Heron and Mr. Chang imitated the call. From just outside the window there was an immediate response. We both laughed.

It was time to go and I climbed on my motorcycle. I had only gone a few meters when the Malayan Night Heron flew across the road. I stopped and snapped a quick shot of it in the sun. It had been a very special morning.


Posted by Wild at Heart Legal Defense Association at 16:26